Zion Evangelical Lutheran Church was founded in 1865 at Roger’s Corners after separating from St. Thomas Evangelical Lutheran church to form a more northern and western location. The original church building was dedicated in 1867 with a church council consisting of Jacob Eschelbach, Michael Hinderer, and John Schenk. The congregation has a rich German heritage based on the concentration of German immigrants in Freedom Township.  All services were conducted in German until 1930. In 1949, a new parish hall was dedicated and a sanctuary was built above it in 1974. Another addition in 1994 added offices and meeting space.

Our congregation continues its Lutheran legacy blending tradition enriched by the increasing diversity of our membership. In 2015, we celebrated our 150th anniversary with a variety of activities that led up to the 500th anniversary of the Reformation in 2017. We are one of more than 100 congregations in the Southeast Michigan Synod of the ELCA. 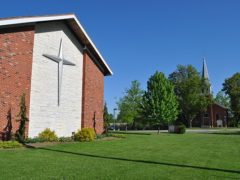